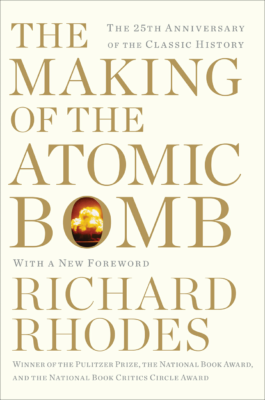 Richard Rhodes’ Pulitzer Prize-winning The Making of the Atomic Bomb has been on my to-read list for a long time. After reading this exquisitely detailed history, I believe the development of the atomic bomb in the Manhattan Project was the pivotal event of the 20th century. The bomb was, simultaneously, a tremendous culmination of a half-century of scientific achievement, a deplorable instrument of war that indiscriminately killed hundreds of thousands, a shortcut to end a war that saved millions of lives, a threat that instigated the Cold War, and perhaps even a marker in geologic history.

The first half of the book dives deeply into the scientific work of physicists, chemists, and engineers from the 1911 discovery of the atomic nucleus through the 1938 discovery of nuclear fission. The story follows Niels Bohr, Leo Szilard, Robert Oppenheimer, Ernest Rutherford, Enrico Fermi, and dozens of other researchers in biographic detail across these decades. The importance of international collaboration is repeatedly emphasized: such rapid scientific progress would have been impossible without timely publication of results for replication and further study. In many cases, multiple laboratories made key discoveries (e.g. the existence of the neutron) within days or weeks of one another, racing be the first to mail their revelations to journals. Anchored by Niels Bohr, this close-knit community shepherded Jewish scientists to safety as anti-Semitism arose in 1930s Germany, many of whom would later work in the Manhattan Project.

If anything, Rhodes’ scientific history is too technical due to surprisingly abbreviated explanations of the underlying physics and chemistry. I struggled to visualize some of the less well-known experimental setups, even after rereading certain passages. The scope of this section is also problematic: on multiple occasions, I had to refer to the index (or Wikipedia) to remind myself about a scientist, discovery, or experiment mentioned in passing in an earlier chapter. I would not recommend this book for readers without a foundational understanding of atomic chemistry or a willingness to do background reading throughout.

The second half of the book chronicles the origin and challenges of the Manhattan Project in fascinating detail. For years, skeptics doubted the practicability of Leo Szilard’s “moonshine”—a nuclear chain reaction—until he and Fermi built the first reactor in a squash court at the University of Chicago. Even then, many considered it infeasible to enrich enough uranium-235 to create a bomb small enough to fit into an airplane. When scientists proposed four equally unproven industrial processes for uranium enrichment, Manhattan Project leaders pursued all of them simultaneously at tremendous expense at massive facilities in Oak Ridge and Hanford. When concerns arose about the efficacy of simpler but cruder gun mechanism eventually used in Little Boy, project leaders initiated research into the more complex implosion mechanism used in Trinity, Fat Man, and all modern nuclear weapons. Producing a few hundred kilograms of enriched uranium and plutonium was truly a herculean effort. That nuclear fission had been discovered less than five years prior is even more astounding.

Throughout the book, Rhodes expounds upon the motivations of Manhattan Project scientists in pursuing an admittedly far-fetched goal. Szilard’s famous 1939 letter to President Roosevelt—signed by Albert Einstein to lend prestige to the missive—cited Nazi atomic weapons research as a major national security concern. Through numerous letters, journal entries, and primary sources, Rhodes shows how many scientists joined the Manhattan Project because they assumed the whoever built the bomb first would win the war. In reality, while Germany (as well as Great Britain, Russia, and Japan) knew the theoretical potential of atomic weapons, they decided other military technologies (e.g. radar) were more justified uses of limited scientific and industrial capacity. By 1945, Nazi atomic scientists were years behind their Allied counterparts, thanks in part to espionage of the Vemork heavy water plant and German oversight of graphite neutron moderators. Only the Americans were sufficiently stubborn to divert billions of dollars and hundreds of thousands of people to build a weapon that might not even work for a war that might be over.

Rhodes never addresses the moral questions about using the atomic bomb head-on. In an early chapter, peacetime scientific progress rapidly devolves into horrifying instruments of death as both sides use chemical weapons in World War I. By World War II, Rhodes emphasizes how both sides perpetrated indiscriminate area bombing on civilian targets: the ancient city of Dresden served little strategic purpose but was firebombed in retaliation for Germany’s offensive at the Battle of the Bulge; the firebombing of Tokyo killed 100,000 to 200,000 people in one night, more than either atomic bomb, and perhaps more than any other single day in the history of war. Based on the ferocious battles at Saipan, Okinawa, and Iwo Jima, it is clear that a mainland Japanese invasion would cost millions of lives on both sides. Only by an overwhelming demonstration of military power at Hiroshima and Nagasaki did Emperor Hirohito overrule his war council and accept the Potsdam Declaration. Does this accelerated end to the war justify the use of atomic weapons? Rhodes’ leaves that debate to the reader.

Perhaps the strongest aspect of Rhodes’ excruciatingly well-researched history is the sense that the characters are human. More than 70 years later, it is all too easy to consider nuclear fission, atomic weapons, and the Cold War arms race as obvious or inevitable. But through the first-hand accounts of brilliant minds involved, Rhodes conveys the doubt, fear, and motivations of the people that are ultimately at the nucleus of this technological history.