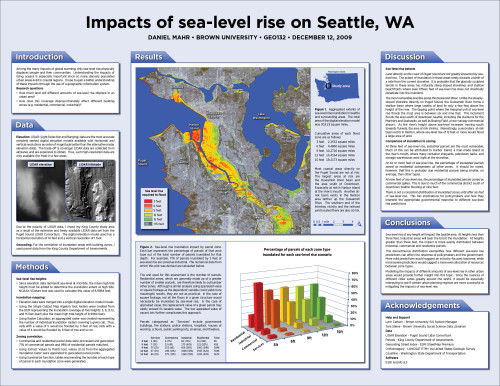 This is a web-formatted version of my final project for GEO132. See above for the poster version.

Among the many impacts of global warming, only sea-level rise physically displaces people and their communities. Understanding the impacts of rising oceans is especially important since so many densely populated urban areas exist in coastal regions. I hope to gain a better understanding of these impacts through the use of a geographic information system.

Elevation: LIDAR (Light Detection and Ranging) data are the most accurate remotely sensed digital elevation models available with horizontal and vertical resolutions an order of magnitude better than the alternative (radar elevation data). The trade-off is coverage: LIDAR data are collected from airplanes and are expensive to obtain. Thus, such high-resolution data are only available (for free) in a few areas.

Due to the paucity of LIDAR data, I chose my King County study area as a result of the extensive and freely available LIDAR data set from the Puget Sound LIDAR Consortium. The digital elevation model used has a horizontal resolution of 14 feet and a vertical resolution of 1 foot.
Geocoding: For the correlation of inundation areas with building zones, I used parcel data from the King County Department of Assessments.

The total area of the digital elevation model was 303.23 square miles.

Cumulative areas of each flood zone are as follows:

Most coastal areas directly on the Puget Sound are not at risk. The largest areas at risk are the Duwamish River basin and the area south of Downtown. Especially at risk is Harbor Island at the river’s mouth. Another at-risk basin exists in the Renton area farther up the Duwamish River. The southern end of the Interbay vicinity and the railroad yard located there are also at risk.

The unit used for this assessment is the number of parcels. Residential zones, which are generally made up of a greater number of smaller parcels, are therefore likely to outnumber other zones. Although a similar analysis using appraised value or square footage as the dependent variable could yield more meaningful results, they are not as practical. In the case of square footage, not all the floors in a given structure would necessarily be inundated by sea-level rise. In the case of appraised value, the replacement value of a given parcel may vastly exceed its taxable value. The low appraised value of vacant lots further complicates this approach.

Land directly on the coast of Puget Sound are not greatly impacted by sea-level rise. The extent of inundation in these areas rarely exceeds a tenth of a mile from the current shoreline. It is probable that the glacially sculpted terrain in these areas has naturally steep-sloped shorelines and shallow beachfronts where even fifteen feet of sea-level rise does not drastically penetrate into the mainland.

The most vulnerable land lies along the Duwamish River. Unlike the steeply-sloped shoreline directly on Puget Sound, the Duwamish River forms a shallow basin where large swaths of land lie only a few feet above the height of the river. The tipping point where the marginal unit of sea-level rise floods the most area is between six and nine feet. This increment floods the area south of downtown Seattle, including the stadiums for the Mariners and Seahawks, as well as Boeing Field, a two-runway commercial airport. As the river’s height above sea-level increases moving south towards Tukwila, the area at risk shrinks. Interestingly, a secondary at-risk basin exists in Renton, where sea-level rise of 12 feet or more would flood a large area of land.

Comparison of inundation to zoning

At three feet of sea-level rise, industrial parcels are the most vulnerable. Much of this can be attributed to Harbor Island, a man-made island at the river’s mouth, where many container shipyards, petroleum tanks, and storage warehouses exist right at the shoreline.

At six or more feet of sea-level rise, the percentage of inundated parcels zoned as residential outnumbers all other zones. It should be noted, however, that this is probably due residential parcels being smaller, on average, than other types.

At nine feet of sea-level rise, the percentage of inundated parcels zoned as commercial spikes. This is due to much of the commercial district south of downtown Seattle flooding at nine feet.

There is not a consistent distribution of inundated zones until after six feet of sea-level rise. This has implications for policymakers and how they interpret the appropriate governmental response to different sea-level rise predictions.

5 thoughts on “Impacts of sea level rise on Seattle, WA”